ISLAMABAD/LAHORE: After a neck-and-neck contest, the ruling Pakistan Tehreek-i-Insaf (PTI) and the opposition Pakistan Muslim League-Nawaz (PML-N) managed to win most of the seats in Sunday’s by-elections on 11 National and 24 provincial assembly seats with the PML-N seems to be edging past the PTI in Punjab.

Most of the seats where by-elections were held had been vacated by those elected on more than one seat in the July 25 general elections, including Prime Minister Imran Khan who won in all the five NA constituencies he had contested.

According to unofficial and unverified results of over 90 per cent polling stations, the PTI despite being at the top of the victory table faced a setback by losing two of the four National Assembly seats vacated by its chief Imran Khan to the Muttahida Majlis-i-Amal and the PML-N. Besides, the PTI was also losing its Punjab Assembly seat from Jhelum that had been vacated by Federal Information Minister Fawad Chaudhry till filing of this report.

The results show both the PTI and the PML-N got four seats each out of 11 NA seats. The PML-Q managed to retain its two seats in Chakwal and Gujrat, whereas the MMA improved its strength in the National Assembly by winning the Bannu seat.

In the by-elections on 24 provincial assembly seats (11 in Punjab, nine in Khyber Pakhtunkhwa and two each in Sindh and Balochistan), the PTI was leading in nine constituencies (four in Punjab and five in KP) while the PML-N was ahead in six constituencies (five in Punjab and one in KP). In July, Mr Khan had contested from Islamabad, Bannu, Mianwali, Lahore and Karachi. He later decided to retain the Mianwali seat.

The Bannu seat in the PTI’s stronghold of KP was clinched by MMA’s Zahid Akram Durrani, son of former chief minister Akram Khan Durrani, whereas former railways minister and a firebrand PML-N leader Khawaja Saad Rafique won the NA-131 Lahore seat. In the July elections, the PTI chief had defeated Mr Akram who this time fielded his son, Zahid Durrani, in Bannu. Mr Zahid managed to defeat PTI’s Nasim Ali Shah with a margin of over 19,000 votes in the by-elections.

The PML-N not only retained its two NA seats, it also managed to snatch two seats from the PTI after a tough contest in Lahore (NA-131) and Attock (NA-56).

The PTI believes that the main reason for its failure to achieve a clear majority in the by-elections was the absence of the senior party leaders, including Imran Khan, from the campaign.

Talking to a private TV channel, Information Minister Fawad Chaudhry said the top party leadership did not run the campaign due to a bar by the Election Commission of Pakistan (ECP) on them. He said the PTI’s politics revolved around Imran Khan and when the party head was not there in the field, then division within the party ranks was quite natural. He was of the opinion that the PTI would have won at least nine of the 11 NA seats had Mr Khan led the election campaign.

Overall the polling remained peaceful with only a few incidents of scuffle and brawls being reported from Khyber Pakhtunkhwa and Punjab.

Another important feature of the by-election was the participation of overseas Pakistanis for the first time.

There were no official word from the ECP about the turnout, but an official of the commission said that the estimated turnout was between 35 and 40 per cent.

In Punjab the by-elections were held on eight NA and 11 provincial assembly seats. The focus of the by-election was on the provincial capital Lahore, where one NA seat had been vacated by Prime Minister Imran Khan and the other by Leader of the Opposition in Punjab Assembly Hamza Shahbaz.

The PML-N fielded Mr Rafique in NA-131 whereas the PTI awarded ticket to Humayun Akhtar Khan, a former minister in the cabinet of military ruler Gen Pervez Musharraf. Mr Rafique, who had lost the July election to the PTI chief with a narrow margin of just 600 votes, this time defeated the PTI candidate with a margin of nearly 10,000 votes.

During the counting of the votes, Mr Rafique warned the ECP of making any attempt to change the results and threatened a strong reaction. Asking the ECP “to rise out of its deep slumber,” Mr Rafique said he was not provided the results from couple of polling stations till late in the night. He also criticised the ECP for not providing him the list of overseas Pakistani voters despite repeated requests. He said that he only got the list through the Lahore High Court. He also alleged that four polling stations were changed at the eleventh hour.

Interestingly, former prime minister Nawaz Sharif had also reached Government College of Technology, Railway Road, to poll his vote for ex-PM Abbasi in the closing hours of polling, but he was not allowed to cast his vote as he was not carrying his computerized national identity card (CNIC) which was mandatory for casting the vote. After winning the election, Mr Abbasi in his victory speech said the people of Pakistan had started rejecting PTI chief Imran Khan over his 50-day performance in the office.

Since the PML-Q retained its two NA seats, Punjab Assembly Speaker Pervaiz Elahi came up to say the people wanted to get rid of the PML-N and wanted that those rulers, who had served the masses in real sense, should return.

In NA-56 (Attock), the PML-N upset the PTI by clinching the seat with a clear margin. The seat had been vacated by PTI’s Tahir Sadiq who had also won the other NA seat from the district in the general elections. PML-N’s Suhail Khan secured 125,665 votes while PTI’s Khurram Ali could get 89,709 votes. 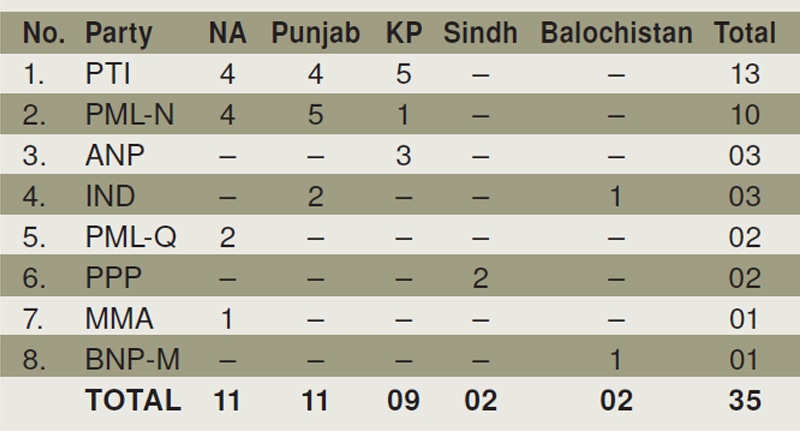 The PML-Q retained both NA-65 (Chakwal) and NA-69 (Gujrat) seats vacated by Punjab Assembly Speaker Chaudhry Pervaiz Elahi. The PML-Q was backed by the PTI since both parties had reached an understanding for seat adjustments in the general elections and were coalition partners at Centre as well as in Punjab.

Of the 11 provincial assembly seats, the PML-N won five and the PTI secured four, whereas two independent candidates won the other two seats.

Of the nine provincial assembly seats, where polling was held on Sunday, the PTI was leading in five constituencies, followed by the Awami National Party (ANP) in three constituencies and the PML-N in Swat (PK-3) constituency.

The PTI had mostly awarded tickets to close family members of its leaders who had won multiple seats in the general elections.

In PK-78 and PK-99, the July 25 elections had been postponed due to the killing of candidates Haroon Ahmad Bilour of the ANP and Ikramullah Khan Gandapur of the PTI, respectively, in suicide bombings.

In PK-78 Peshawar, Samar Haroon Bilour, widow of late Haroon Bilour, of the ANP won the seat by securing 20,916 votes against her rival Irfan Abdul Salam of the PTI who bagged 16,819 votes.

Similarly, the PK-99 D.I. Khan seat was won by PTI’s Aghaz Ikramullah Gandapur who bagged 30,330 votes whereas an independent Fatehullah Khan remained runner up with 22,825 votes.

According to unofficial results, PTI’s Alamgir Khan emerged victorious on the NA-243 seat by defeating Aamir Waliuddin Chishti of the Muttahida Qaumi Movement-Pakistan.

The PS-30 Khairpur seat, which had been vacated by Pir Fazal Ali Shah who had retained an NA seat, was won by PPP’s Syed Ahmad Raza Shah Jilani in the by-elections by defeating Waliur Rehman of the Grand Democratic Alliance (GDA) and 10 others with a big margin.

PPP’s Sajid Ali Jokhio won the PS-87 Malir seat by defeating PTI’s Quadir Bux Khan Gabol. In Malir, the elections had been postponed due to death of a candidate.

According to unofficial results, Akbar Mengal, a joint candidate of the Balochistan National Party-Mengal and Jamiat Ulema Islam-Fazl, was leading in PB-40-Khuzdar, till filing of this report.

In PB-36 Mastung, former Balochistan chief minister Nawab Aslam Khan Raisani who contested the by-elections as an independent candidate was leading with results of around 20 polling stations yet to come.

Mansoor Malik from Lahore and Abdul Wahid Shahwani from Khuzdar also contributed to the report.