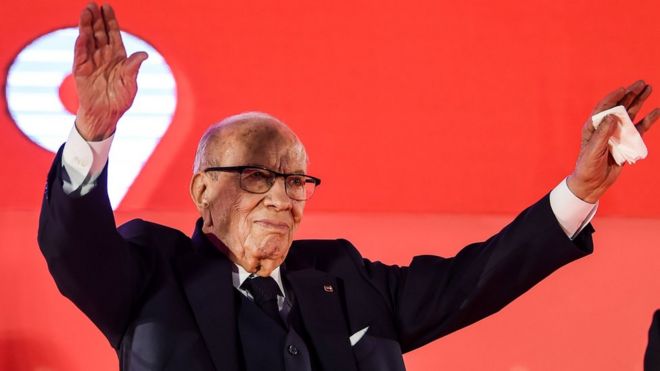 They gave no further details. Mr Essebsi - who at 92 is the world's oldest sitting president - was also treated in hospital last week.

PM Youssef Chahed said Mr Essebsi was receiving all the attention he needed and people should stop spreading "fake news" about his condition.

There had been reports that the president had died.

Mr Chahed said in a Facebook post (in Arabic) that he had visited the president in hospital.

Earlier this year, he announced he would not stand in elections expected in November, saying someone younger should take charge.

Since then, Tunisia has won praise as the only democracy to emerge from the revolutions of the so-called Arab spring.

For his supporters, Mr Essebsi is an experienced politician and protector of secular values who has helped to preserve the state's authority and standing in the international arena.

But for his foes, the president belongs to the past and is a part of the Tunisia's repressive deep state.

Before assuming the presidency in 2014, Mr Essebsi had served on-off in ministerial roles since the 1960s.

He came to power leading a secular party - Nida Tounes (Call of Tunisia) - who opposed Islamists in government.

His supporters have portrayed him as a man above amateurs - someone who could help address security issues and attract foreign investment.

In recent years, Tunisia has suffered attacks by Islamists and economic problems, with unemployment a persistent issue.

Earlier on Thursday, there were two suicide bomb attacks on security forces in the capital, Tunis.

The interior ministry said one targeted a police patrol on one of the city's main streets. One officer was killed and another wounded along with three civilians.

The second bombing - in another neighbourhood - injured four people at the gates of a national guard base.

So-called Islamic State later claimed it carried out the attacks.