The Labor-Gesher and Meretz parties will merge their lists and run on a joint slate in the March 2 elections for the Knesset, the two parties announced Monday morning.

The decision came after marathon talks between Labor leader Amir Peretz and Meretz chief Nitzan Horowitz, with the left-wing parties fearing one of them could fail to clear the vote threshold needed to enter the Knesset if they ran separately.

“This is a significant move for the 2020 election, which will ensure the ability to form a government of change and hope,” the leaders said in a statement. They said the new, currently unnamed alliance will serve as “the social heart and diplomatic compass for the next government after the end of the Netanyahu era.”

arties have until January 15 to submit their final slates for the upcoming election.

The merger comes after talks between Meretz and Labor in two previous elections last year failed to form a merger between the left-of-center parties. Ahead of September’s elections, Labor instead merged with upstart Gesher, headed by Orly Levy-Abekasis, a former lawmaker from the right-wing Yisrael Beytenu party, while Meretz formed a partnership with a group of former Labor politicians and others to form the Democratic Camp.

The joining of Levy-Abekasis and the hard-left Meretz marks a drastic shift for the formerly right-wing lawmaker whose father once served as foreign minister for Likud.

Gesher’s alliance with Labor was previously seen as an obstacle to such an alliance, due to Levy-Abekasis’s moderate right-wing positions on diplomatic issues clashing with those of Meretz — though the sides share positions on matters of social equality.

Speaking to Army Radio Levy-Abekasis did not hide her unhappiness over joining with Meretz but said of Peretz: “Sometimes you need to consider your partner who is facing immense pressure.”

She added that her party — which, according to the new alliance’s roster, is unlikely to include any MK besides her in the next Knesset — would maintain “full independence on diplomatic, security and economic matters.”

Levy-Abekasis told Channel 12 she did not think she was straying from the political path of her father in that she was committed to “real change” on socio-economic issues.

She said it was not an easy decision to make, but described the move as a “technical” one that was “required” under the circumstances. “Labor-Gesher will continue with the same ideology it has had,” she said, listing the party’s socio-economic platform planks. 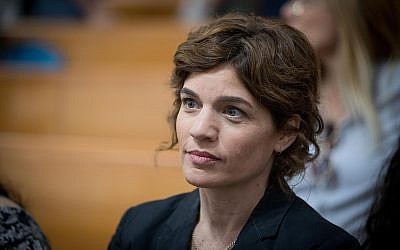 Democratic Camp lawmaker Tamar Zandberg at a hearing at the Supreme Court in Jerusalem on petitions to disqualify the extremist Otzma Yehudit party from running in the September elections, on August 22, 2019. (Yonatan Sindel/Flash90)

Labor-Gesher will have six of the first 11 spots in the new unified slate while Meretz will have five. Peretz will lead, with Levy-Abekasis at no. 2 and Horowitz at no. 3. They will be followed by Meretz’s Tamar Zandberg, and Labor’s Itzik Shmuli and Merav Michaeli rounding out the top six. Former IDF deputy chief of staff Yair Golan, who merged with Meretz in the last election, will be placed seventh on the list.

Labor MKs Omer Barlev and Revital Swid will round out the top 10 with Meretz’s Issawi Frej at the 11th spot.

The joint slate will run under Labor’s traditional ballot slip at the polls with the letters Alef, Mem, Tav (or “Emet”).

Green Party leader Stav Shaffir, a former Labor stalwart who in September’s elections was placed second on the list of the Democratic Camp (an alliance between Meretz, the Green Party and Golan’s Israel Democratic Party), was not included in the new union. Though officials in both parties did not rule out her joining later, the odds appeared low.

Polls have shown both Labor-Gesher and Meretz hovering at between four and six Knesset seats each, in danger of falling below the 3.25% threshold of total votes (representing four seats) required to enter the Knesset.

Labor’s Michaeli welcomed the move, saying “A joint run of the Zionist left… will save the country and keep it Zionist and democratic.”

Labor chief Peretz had announced his plans to unite with Meretz at a Labor party directorate meeting Sunday evening. “We have no choice but to unite,” he told the delegates. Peretz had reportedly been under intense pressure from fellow Labor MKs to move forward with the merger in light of the latest polls.

Senior Labor MK Itzik Shmuli said on Sunday morning that he supported a merger, but only as a “technical bloc” that could potentially separate soon after the elections.

Peretz has in the past expressed hesitation regarding a Labor-Democratic Camp merger, worrying the move would scare away potential right-leaning voters from his socioeconomic-minded party.

Instead, he proposed last week a union of all three Zionist centrist and left-of-center parties — Blue and White, Labor and Democratic Camp —  in order to strengthen the bloc and ensure that the latter two parties cross the electoral threshold.

But Blue and White leader Benny Gantz rejected the prospect of an alliance, saying at a faction meeting that he “will not unite with any additional parties — not on the left and not on the right.”

Ahead of the last election in September, Peretz defied intense pressure for an alliance with Democratic Camp, arguing a joint faction would deliver fewer total votes for the left than a run as two separate parties.

Democratic Camp said last week that it supported Peretz’s idea of a broad center-left union, but said that the first step should be an alliance of Labor-Gesher with Democratic Camp.

“We will support any union on the center-left,” Horowitz said in a statement. “But the most strategic, vital, immediate and necessary union is between Labor-Gesher and the Democratic Camp to forge a strong Israeli left! That’s the hope voters are looking for, that’s the political and moral act needed at this time, that’s the kind of move that could rid us of Netanyahu.”