I participated in the January Revolution! 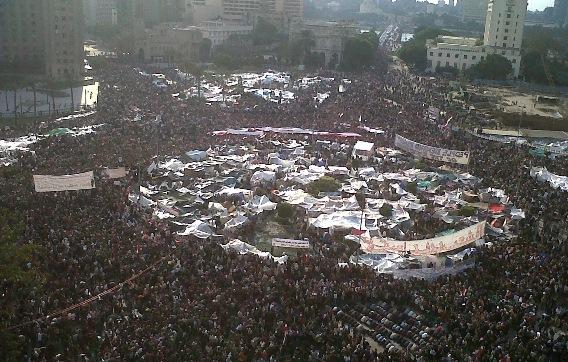 With the hashtag "I participated in the January revolution", social networks in Egypt have been awash with recollections and protestation on the fifth anniversary of the 25 January 2011 revolution. The mobilisation on both Facebook and Twitter in defence of those 18 days of mass protests that led to the overthrow of then-President Hosni Mubarak, has been a breath of fresh air and a change compared to last year's anniversary. Then, the country's so-called "strong man", President Abdel Fattah Al Sisi, benefitted from the majority support of the population in his fight against terrorism and, in particular, against the Muslim Brotherhood organisation. Criticism of the regime by progressive forces was labelled 'treason' or 'terrorism', or was linked directly to the Muslim Brotherhood. There seemed to be no space possible for an opposition and the hopes of a new popular mobilisation arising seemed remote, even impossible.

What has taken place in the last year? The popularity of Al Sisi has fallen notably, especially among the popular classes who, along with other sectors of society, decided to support him in 2013 in toppling the Islamist Mohamed Morsi from the presidency after a year in power. This support was ratified in the presidential elections of 2014. However, the population's discontent has been brewing - not only due to the army's absolute control of the state, but fundamentally because of the country's persistent economic problems, ongoing terrorism, the continued slump in tourism and indeed, the very same social demands that brought thousands of Egyptians out onto the streets in 2011 under the banners "Bread, Freedom & Social Justice". The protests of unemployed workers that have broken out in Tunisia in recent weeks, silenced this time in the Egyptian media out of fears of a repeat of what happened five years ago, demonstrate how the social agenda in both countries has been abandoned by the new authorities, who have prioritised institutional and above all else security issues instead, at the same time as they have reduced freedoms.

In fact, the authorities have blocked public spaces - particularly Tahrir Square, the epicentre of the popular protests five years ago - to prevent them from being occupied again. Likewise, the number of activists rounded up from their homes has increased, prison sentences  have been extended on youths imprisoned for more than a year for having protested, and a campaign to discredit the 25 January revolution has been launched. Together these factors have kept Egyptians from coming out onto the streets to celebrate this fifth anniversary. However, there is also a sense that the regime is faltering and that spaces of criticism are opening, such as those aforementioned on social networks or in the media, and those who are making the criticisms are not being branded 'Islamists, terrorists or traitors'. There are people in Egypt who seem to have recovered confidence in their ability to effect change. The population is reacting and moving from being subjugated towards being active, united by a common objective. The Egyptian people could once again unite to demand social and economic change and greater stability without restrictions on its freedoms.