The next Iranian President: Rohani or… Ahmadinejad? 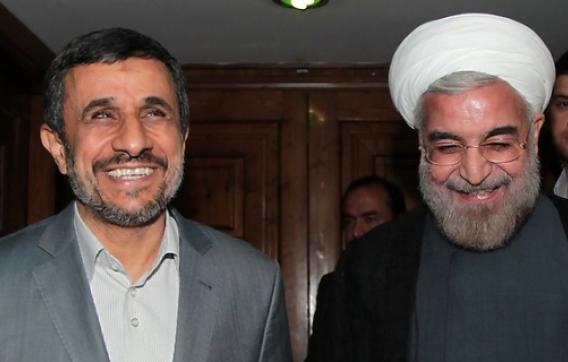 The next Iranian presidential elections will be held on May 19th 2017, and despite being too soon for any electoral speculation, it is expected that the current President Hassan Rohani will run for the reelection. None of the presidents that did it before him failed (Khamenei, Rafsanjani, Khatami and Ahmadinejad had two consecutive mandates), nor  their options were cut short for disqualification by the Guardians Council, despite in 2001 and 2009 this possibility was speculated.  But it is not the rumors about a Council veto to stop Rohani’s career, but his small margin in the first election (barely 51% of the votes); his scarce economic achievements (inflation went down and the dollar stabilized, but unemployment is not being reduced and foreign investments are slow); and the internal critics related to the nuclear agreement might reduce his chances for reelection.

To this uncertain outlook it has to be added the increasing speculation about former President Mahmud Ahmadinejad intentions to run again, once the constitutional pitfall of the two consecutive mandates is surpassed. Ahmadinejad has been maintaining a low profile since the end of his mandate in August 2013. The failed support to his collaborator and political relative Esfandiar Rahim Mashaei for the last presidential elections meant a strong setback for his future political aspirations. Although he threatened with legal actions against the Guardian Council, he opted to give up the battle and start to prepare his run for 2017. For the legislative elections in March 2016 Ahmadinejad has been gathering his former ministers and collaborators, towards the consolidation of a group within the “principlists” (conservatives) who will support his ideas in the Parliament. Also Ahmadinejad has been mobilizing his followers in several provinces, taking advantage of his popularity in rural areas, with the celebration of several rallies. His last public appearance has doubtlessly attracted attention, an open letter to US’s President Barack Obama, criticizing his lack of change towards Iran despite the JCPOA, and demanding the removal of the 2,000 million dollars freeze of Iranian funds ruled by the US Supreme Court. Being this a symbolic letter it does represent an entrance in the international scene by Ahmadinejad, following his own tradition of missives to Obama and George Bush.